I recently took a survey of the .22LR ammo used by our Yaupon Creek Silhouette (YCSA) shooters for .22BPCR matches. All the shooters I requested info from have scored at least 30 with scope or 28 with iron sights in several 40-shot matches since Jan. this year. Following are my comments from collecting the information and a spread sheet of the data.

RWS is the most popular brand.

The CMP bulk Eley is popular with several shooters but some are having problems with the latest batches. One shooter said “I used the CMP Eley bulk ammo and shot my best scores with it. But it only shoots well on cooler days. Hot days it does not shoot well. Also the older CMP Ely ammo bullets weight 40 grains & the new stuff weighs 42 gr.” Another shooter exclusively uses CMP bulk Eley & has shot some excellent mid-30’s scores even on hot days. He has a very tight custom chamber is his rifle.

Some believe that CMP bulk Eley is what falls out when sorting Eley Tenex or Eley Match which is definitely not correct. Eley Tenex & Match have flat tip bullets with a small tit in the center. Therefore, assuming CMP bulk is actually fallout from sorting other grades, it must come from Eley edge, Eley club or Eley target.

A few more interesting comments: Some use RWS R-50 for the chickens & pigs & RWS R-100 for the turkeys and rams. But note that one shooter does the opposite. He tends to use R-100 for the shorter distances & R-50 for the longer distances. For important matches he exclusively uses R-50. When I discussed it with him he said that R-50 tends to shoot better at the longer distances. He further stated “It’s screened to tighter tolerances than R-100 due to being much more popular in Europe where most of the competition is at 50 meters.”

Overall this was an interesting exercise. I hope it helps some of you reading this. 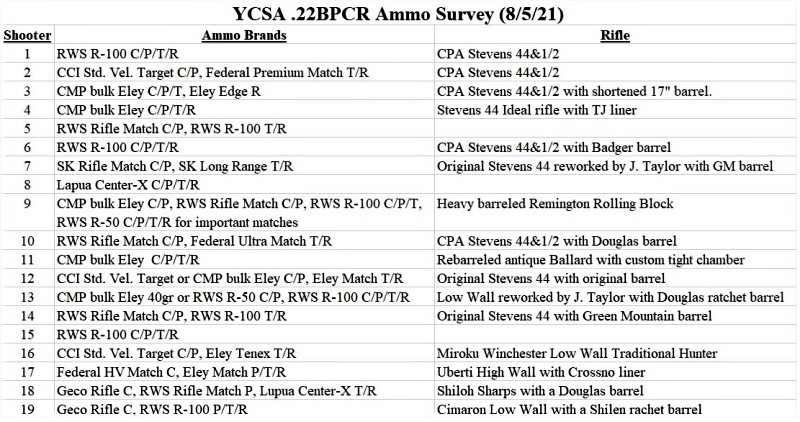 Are the shooter numbers in order of match finish?
"Only God can judge me." Merlin

Good question. I should have been clearer when presenting the data. No, they simply indicate a shooter that scored either 30 with a scope of 28 with iron sights in one or more of the eight 40-shot matches held since Jan. this year. I had them listed by name in alphabetical order and removed the names but left them in the same order. I wanted to get an ideal the ammo used by the high scorers. Most but now all are master class shooters. BTW, I'm shooter #12 which ties with the ammo that I pulled the bullets from to measure their weight as noted in the comments.